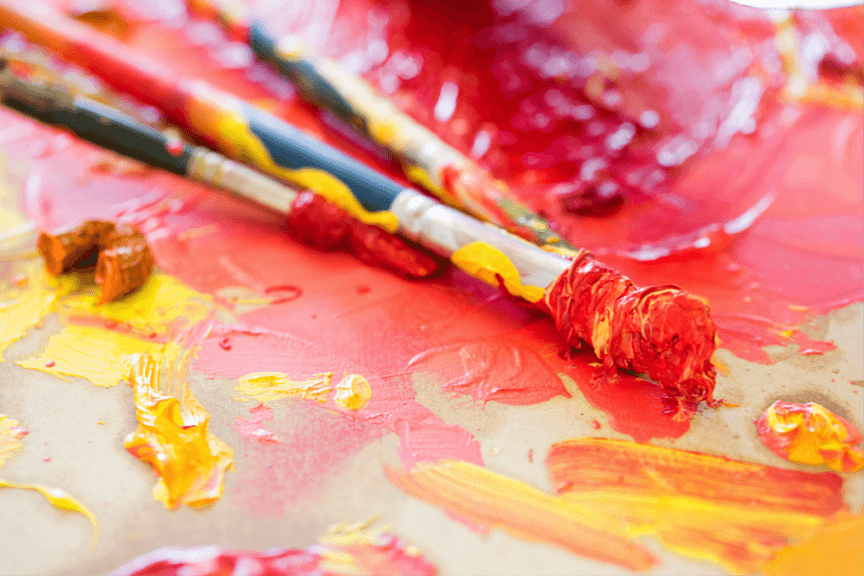 Highly awarded Sydney contemporary artist Alesandro Ljubicic’s beautiful abstract paintings can be described as colourful, extravagant, abundant and inspiring. Alesandro’s highly textured oil paintings on linen are in high demand and, although he works in a diverse range of subjects, each painting has his distinctive style. His current series focuses on abstract florals in vibrant colours on fresh white linen backgrounds. 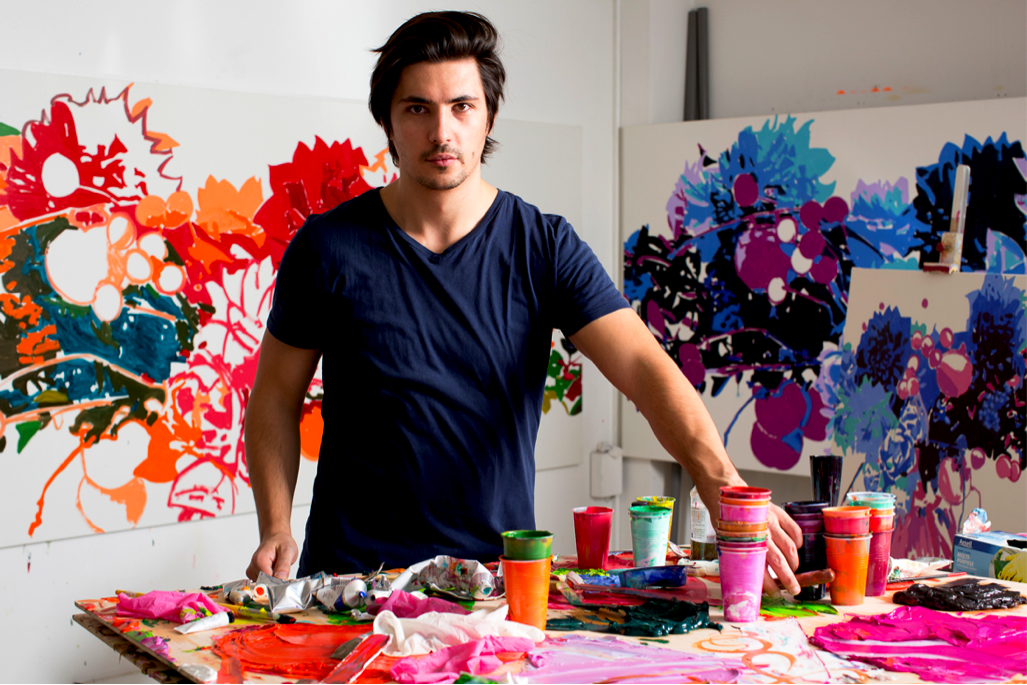 Fellow Sydneysider and friend, florist Sean Cook of Mr Cook, frequently provides floral arrangements to Alesandro that often inspire his beautiful still life paintings. As the fresh floral arrangements change over time, they affect the nature of Alesandro’s art, which is in constant change due to the physical aspect in which they are painted. The works, being so rich in colour and textured paint, change as the light hits the paintings creating a whole new work with shadow constantly creating a new element to the work.

“I am always inspired by my friend, Alesandro Ljubicic, I have invested in his paintings which have beautifully immortalised some of the floral arrangements I created for him to paint” - Sean Cook MR COOK 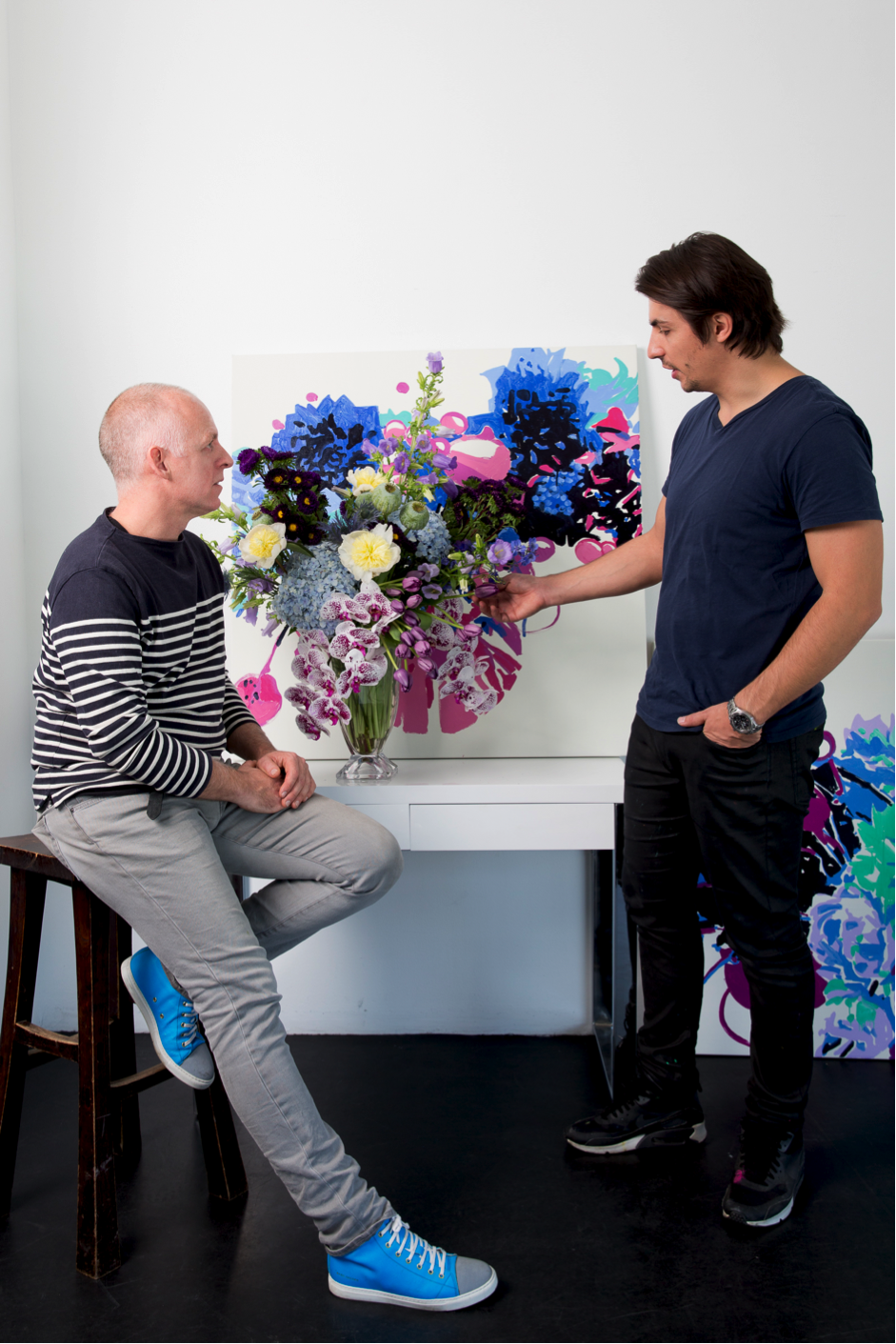 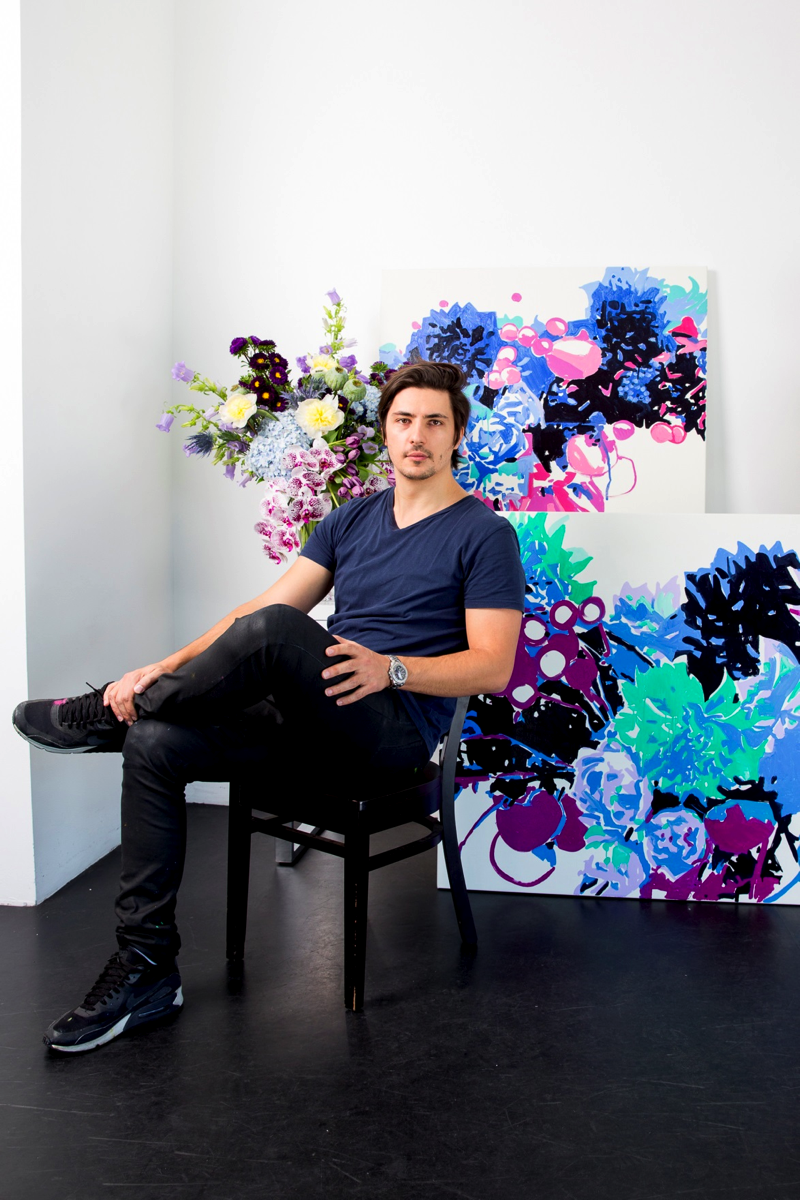 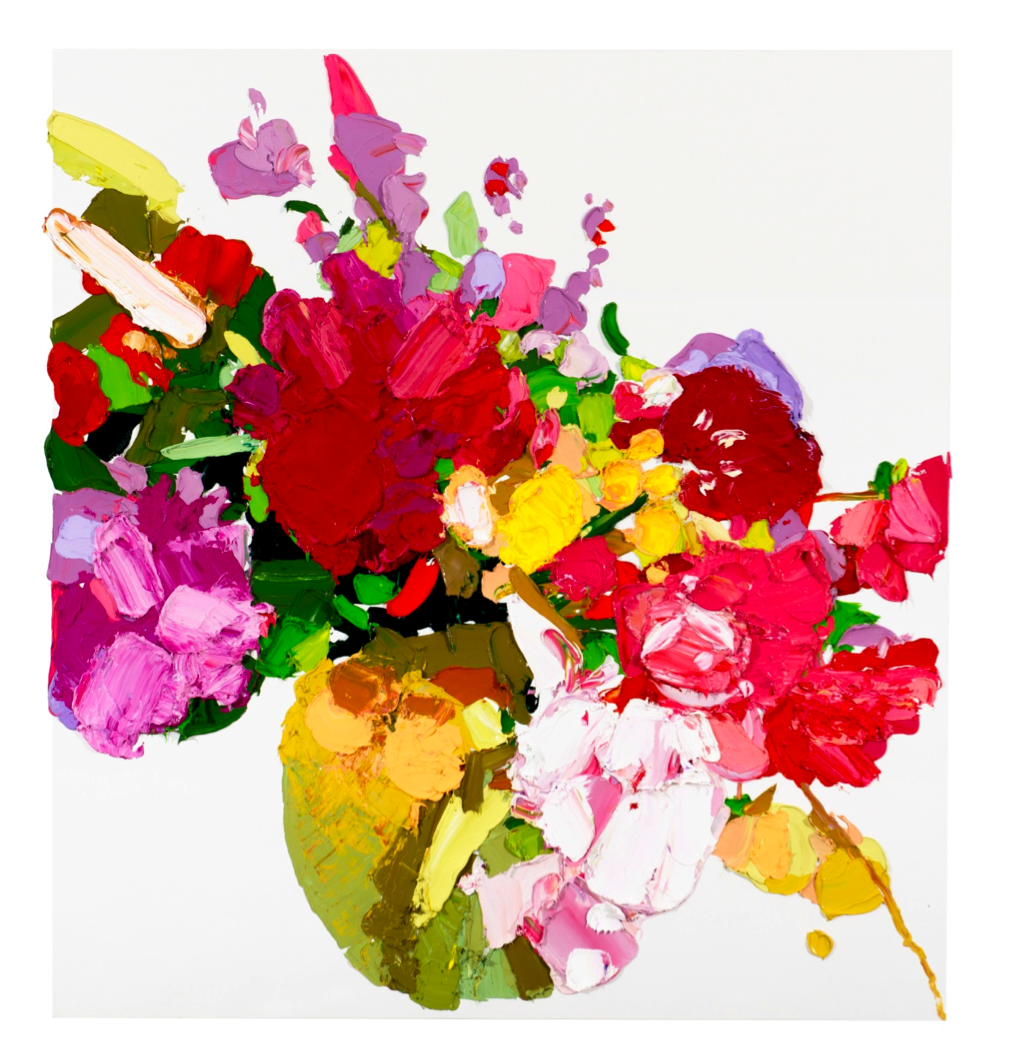 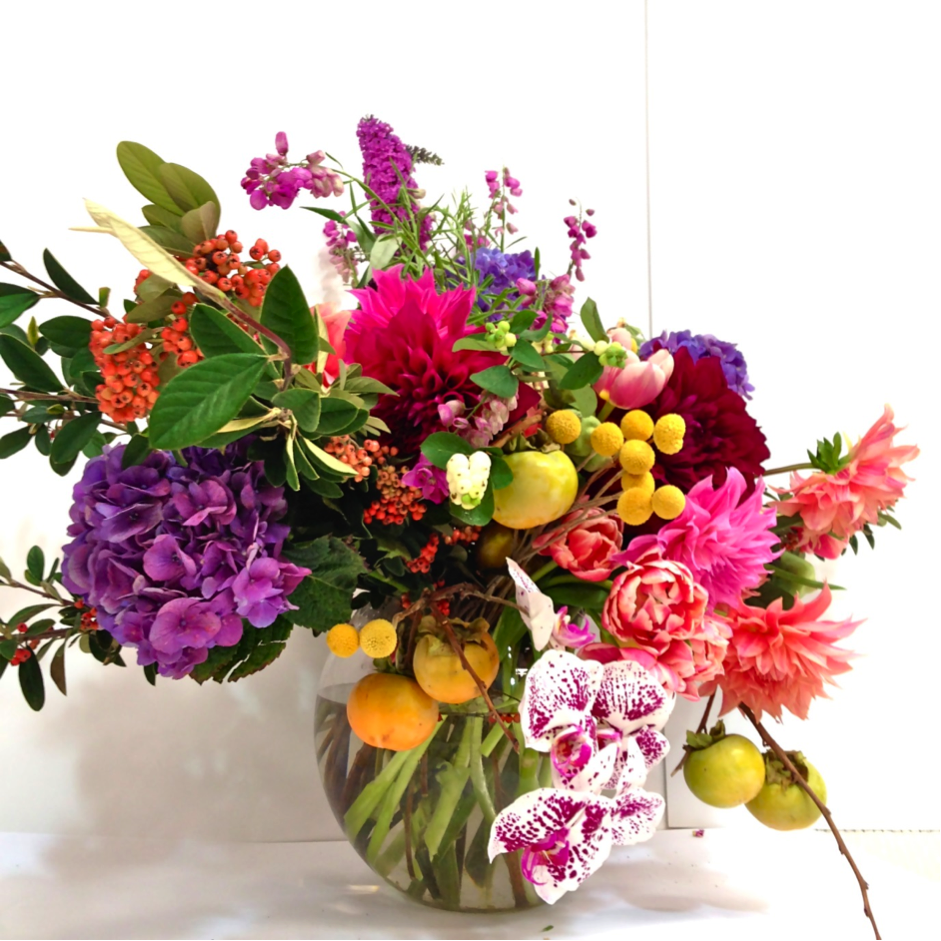 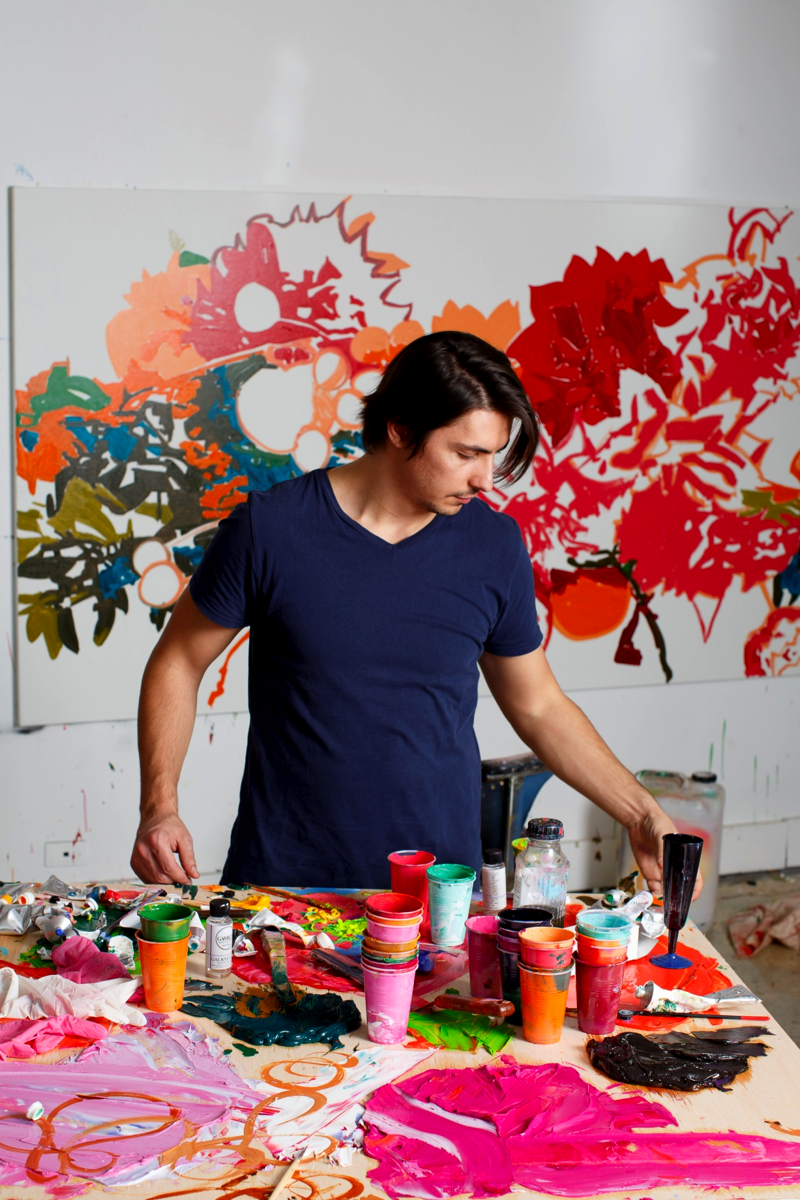 Alesandro Ljubicic in his Sydney studio with some of his works in progress. Photo credit: Jacqui Turk

Alesandro Ljubicic was born in 1986 in a town called Jajce in Bosnia, which was first built in the 14th century and served as the capital of the independent Bosnian kingdom during its time. In 1991, following the Croatian War of Independence, the Ljubicic family moved to Sydney, Australia with their only child, Alesandro to start a new life.

From a very young age, Alesandro’s creative passion and inherent discipline to achieve was always present. Throughout his teens, Alesandro was constantly given credit for his art efforts. He was accepted into The National Art School, a leading institution that produced great artists such as Wendy Sharpe and John Olsen, which was to be a deﬁnitive moment for Alesandro. He decided to follow his passion in becoming a practising artist.

While studying at the National Art School, Alesandro Ljubicic was involved in a number of exhibitions and art awards. He completed his Bachelor of Fine Arts degree in 2007 with a high distinction and he also won the William Fletcher Scholarship. In the same year, he also exhibited a solo show at the Xavier Art Space, which was opened by Sydney radio broadcaster Alan Jones and with proceeds going to the Cancer Foundation. Alesandro’s awards include Finalist in the Paddington Art Prize in 2009 and Finalist in the 2010 Doug Moran National Portrait Prize, the richest Australian portrait prize, and also the richest portrait prize in the world.

Now, at 28 years of age, Alesandro is making a very big impact on the Australian art scene. He spends his time doing what he passionately loves, creating a large number of paintings for private collections and his exhibitions.  Alesandro also owns and runs The Sydney Art Store, one of the largest fine art supplies in Sydney, which is located in Waterloo. The Sydney Art Store stocks the finest art supplies and premium art materials from the best suppliers in Australia and the globe. These materials include oil paints and acrylics from France, superior handmade paints from New York and the world’s finest pastels and watercolours from Germany & America. 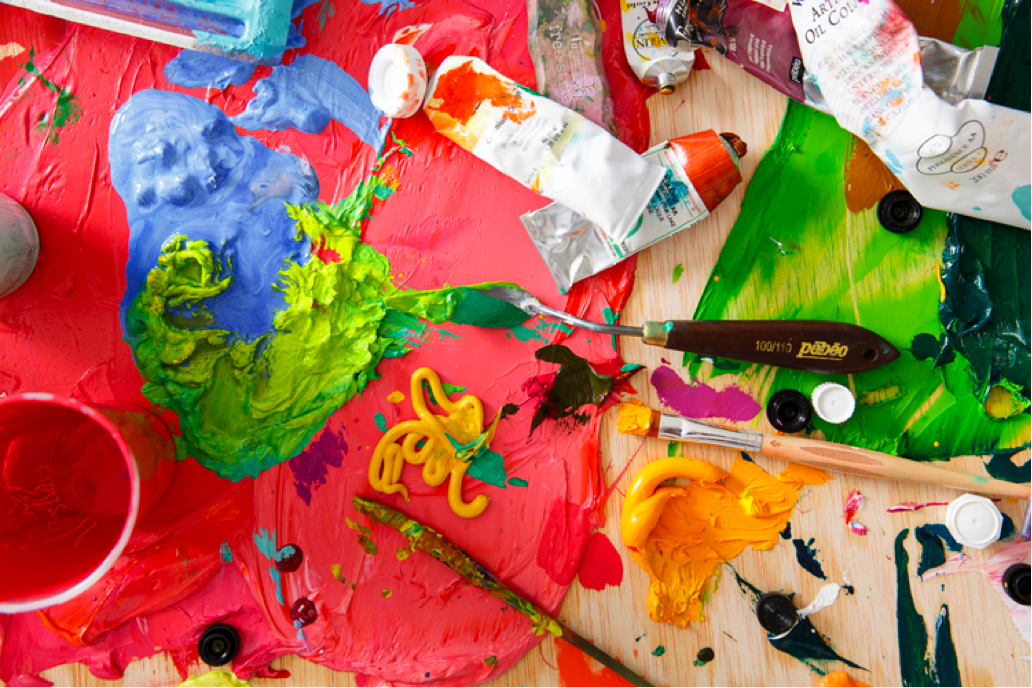 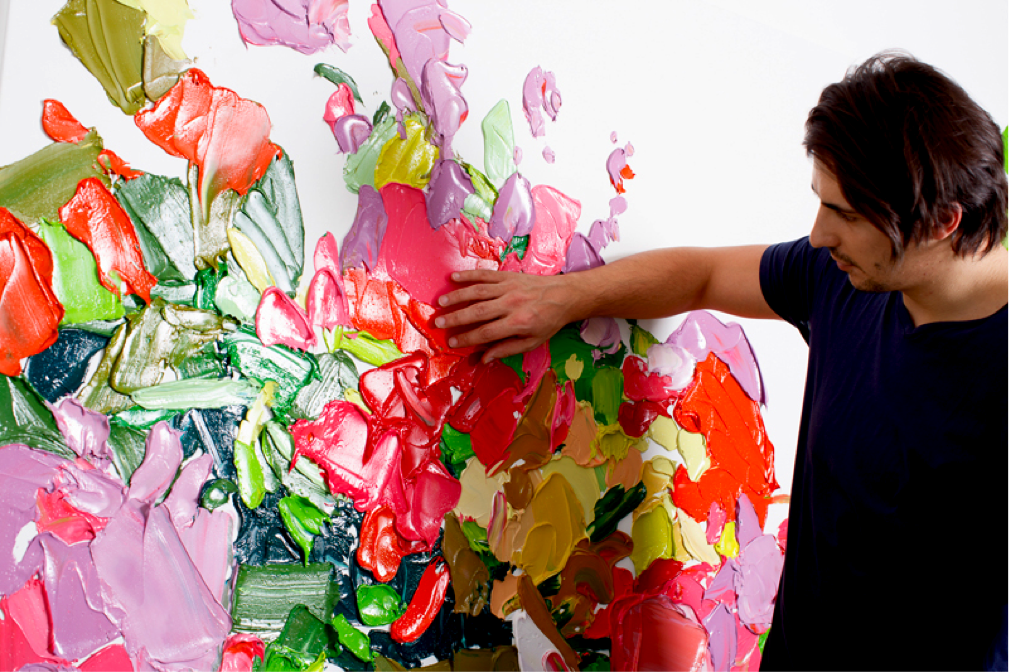 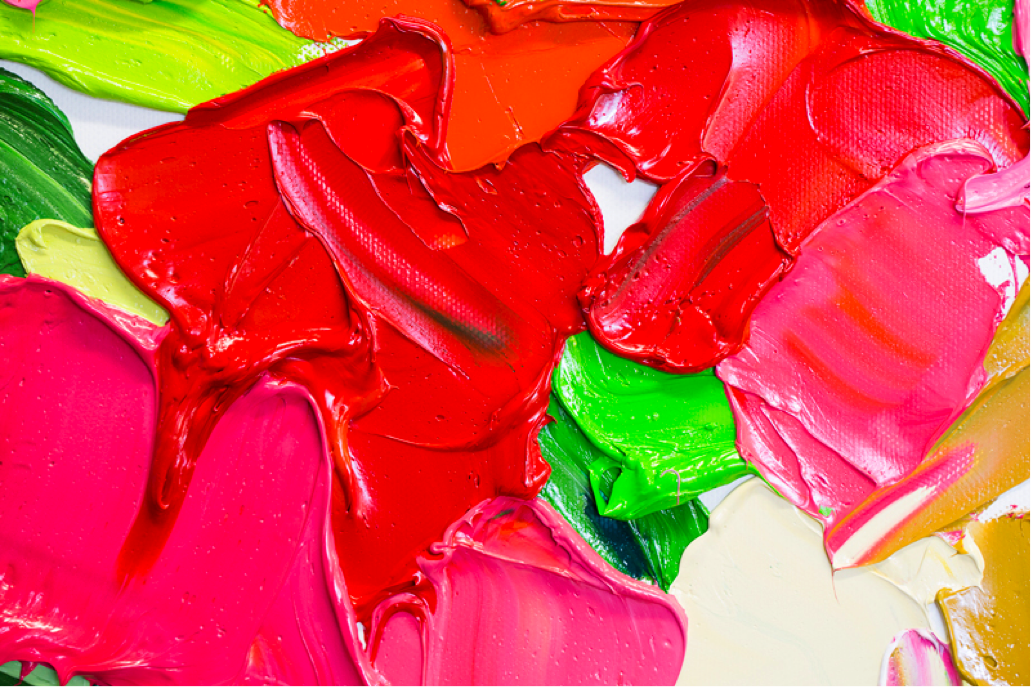 Alesandro photographs the various floral arrangements and then manipulates the image in Photoshop in order to capture an abstracted form of the flowers. It is essentially the colour that is central to Alesandro’s paintings. The titles of the paintings are based on the pigment in the oil paints. Alesandro uses the finest quality oil paints often supplied by the original companies in Europe that have been using the same recipe for over 300 years. Each tube of oil paint costs between $250 and $350 and the Italian linen is over $200 per meter.

Alesandro works in an open plan studio painting four to six paintings at once. He moves from painting to painting, waiting for the layers of to dry. Alesandro believes, that while painting, he needs to discover where the work will take him, as this is the directive to an honest and successful painting.

“Alesandro’s takes what could be thought of as a dated subject and creates works that explode with life. The vibrancy of colour makes a bold statement in any space, while the texture is simply seductive.” - Interior Designer Brett Mickan 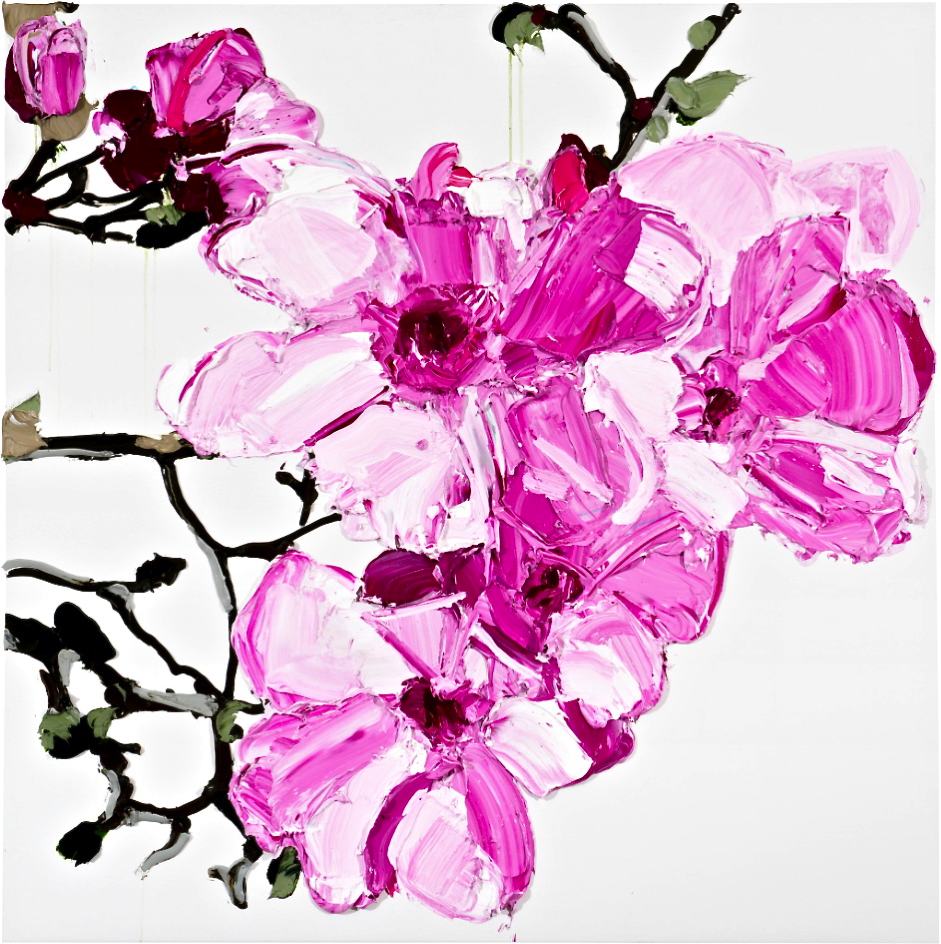 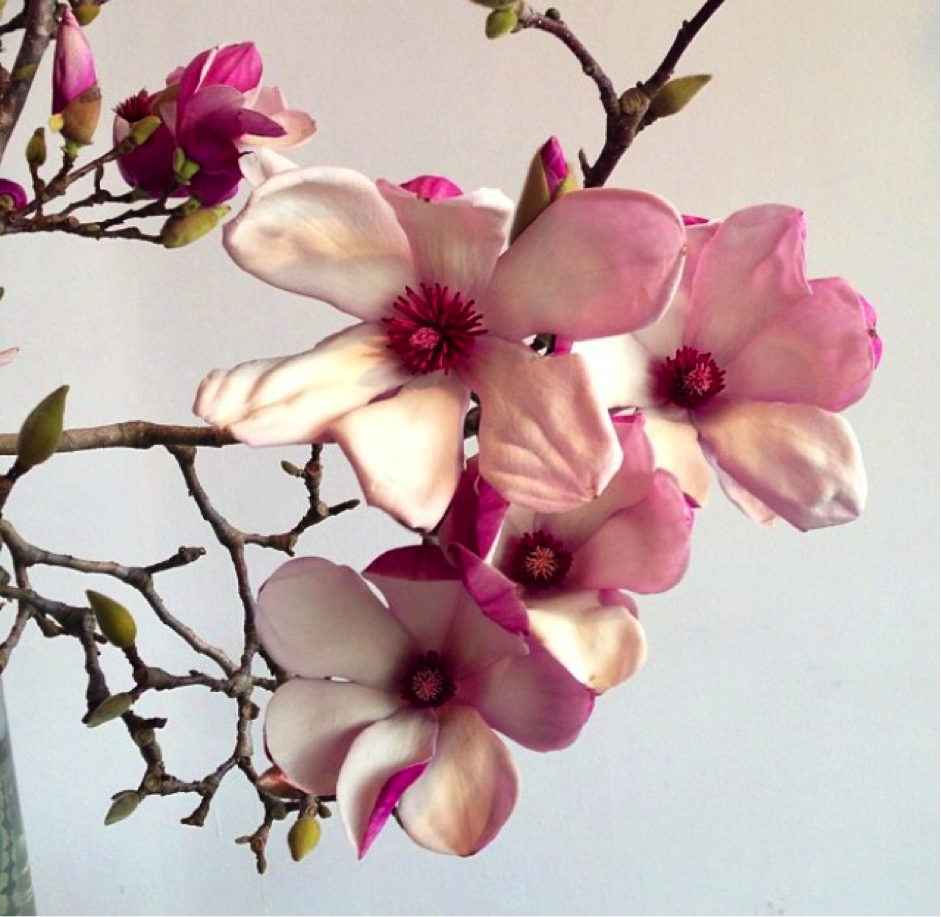 In Janury 2014, Alesandro was asked to create two large-scale paintings for two brothers whose father had built a luxurious four level house overlooking the Sydney harbour for each son. The houses mirror each other, with identical floor plans, however one house interior has white marble and the other is finished in cream. Both of the three-meter paintings hang on the same wall in each house – Turquoise Magenta in warm colours for the cream marble house and Pthalo Rose Turquoise in cool tones to complement the white marble. 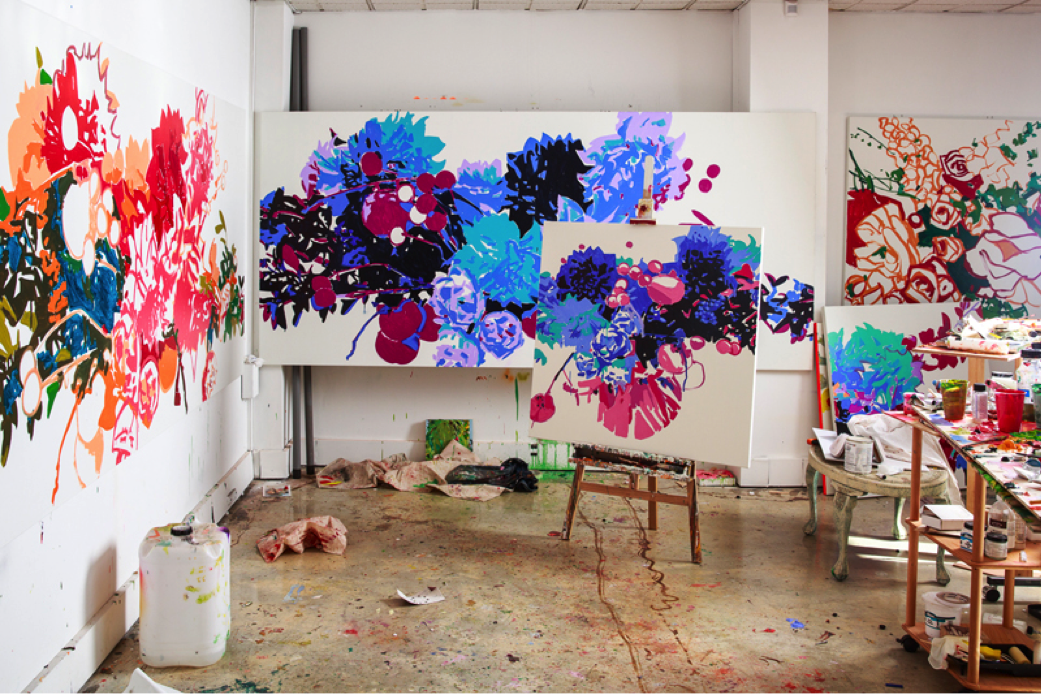 One day in 2013, Brenton and Dominique Moore, clients of Art2Muse Gallery noticed a large abstract orange painting by Alesandro Ljubicic in the shop window of Mr Cook in Double Bay, Sydney. They asked gallery owner Katrina Hampton to arrange a consultation in their home together with Alesandro. Brenton and Dominique had been looking for a contemporary artist to interpret a traditional painting that had great significance to them. The family had been the owners of a large farm in rural NSW for over five generations until the property was sold around the turn of the century. In 1951, Brenton’s grandparents hosted the Sydney artist Sali Herman on their property and invited him to paint whatever took his fancy. Sali decided to paint a significant dam on the property. He then returned to Sydney and entered the work in the Wynne Art Prize. The painting became a finalist that year and was quickly bought by BHP. The company hung the painting in their Melbourne boardroom for many years before it was sold to a private collector who is also based in Melbourne.

Brenton and Dominique wanted to keep the significance of Sali Herman’s painting and the farm in the family. They commissioned Alesandro to create a large-scale contemporary interpretation of Moorelands Dam in his distinctive textured style. It was arranged for Alesandro to visit the property north of Moree, New South Wales, to view the site and local landscape. Rather than composing a small ‘study’ in preparation of the final piece, Alesandro started directly on the large (330 x 130cm) linen on reinforced aluminium stretchers to withstand the weight of the oil paint.

Following Alesandro’s visit to the property, Brenton and Dominique made several visits to the studio as the painting evolved. Over many months the painting started to take shape with great effect. The grey landscape came alive with flesh undertones, the enormous sky and finally the dam emerging out of the scrub to take centre stage. 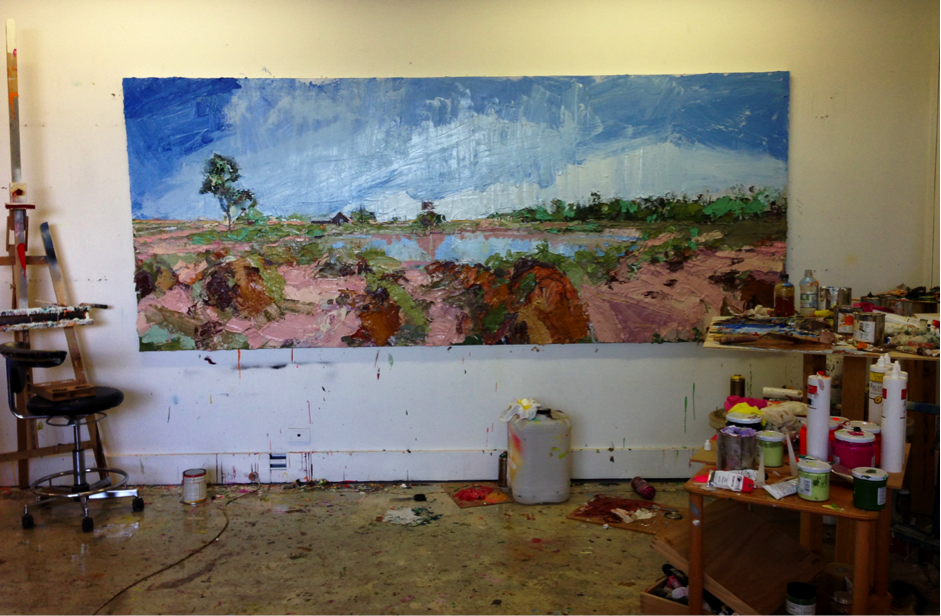 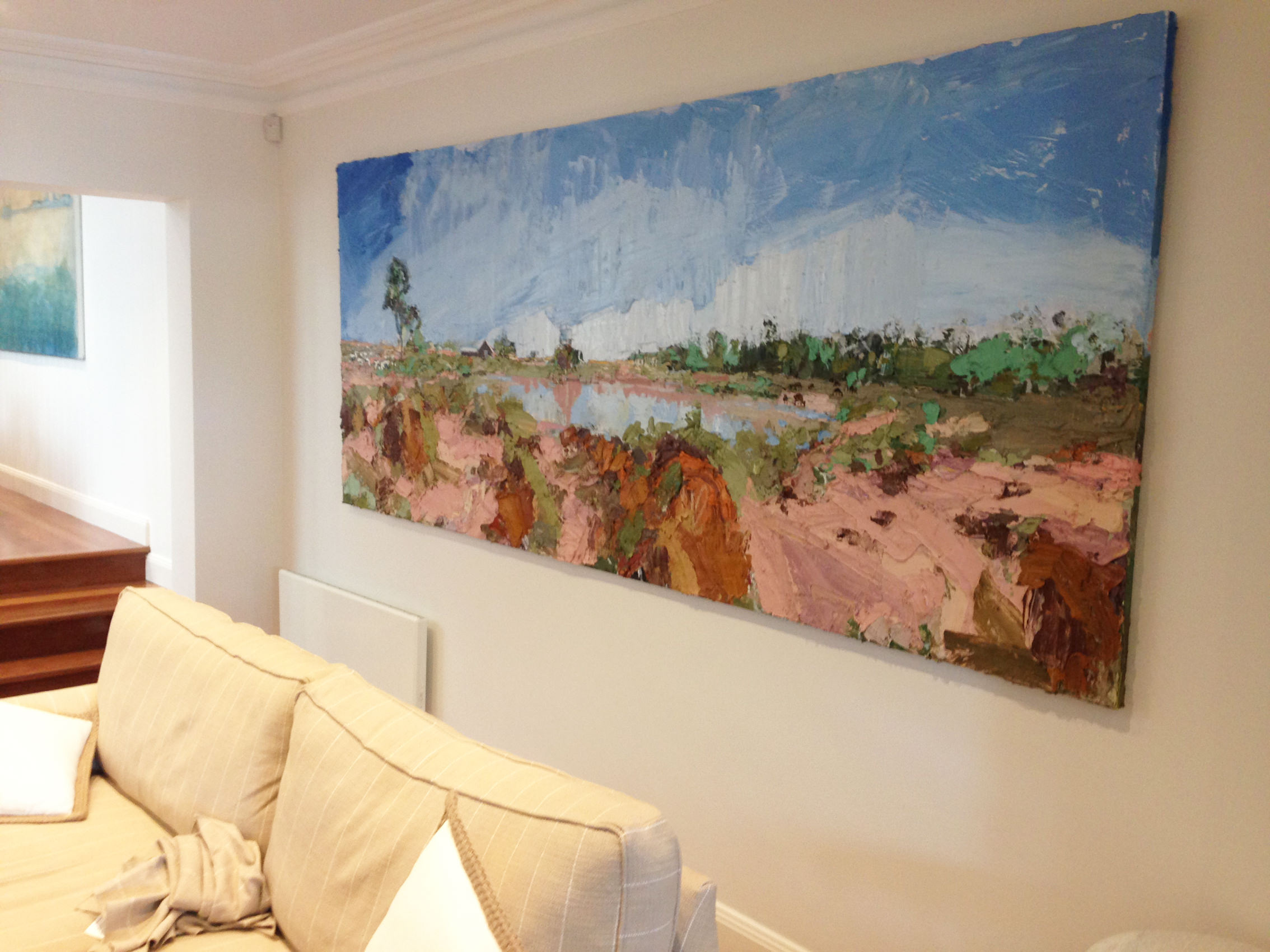 “If I, as an artist, know what my painting will look like…well then what is the challenge in that, and why start that particular painting? The reason I starting a particular painting is to ﬁnd out what journey that inspiration will take me on and what the end result will be, only then as an Artist I am satisﬁed and content” - Alesandro Ljubicic

Alesandro plans to look further into how he can create depth in his work while evoking positive and happy emotions via colour, texture and scale. He will continue to keep the same theme of ‘Still Life’ and is looking forward to continuing his creative collaboration with florist Sean Cook from Mr Cook. For Alesandro this solo exhibition at Art2Muse Gallery in November is different from his previous show because he feels there is more soul and emotion in this work. From the energy of the bold colour and mark making in which the paintings have been painted, Alesandro explains, “not to take anything from my previous show, where the paintings were beautifully painted, but I just felt they were missing something which these paintings have, where almost everyone I speak to is drawn in by them.” 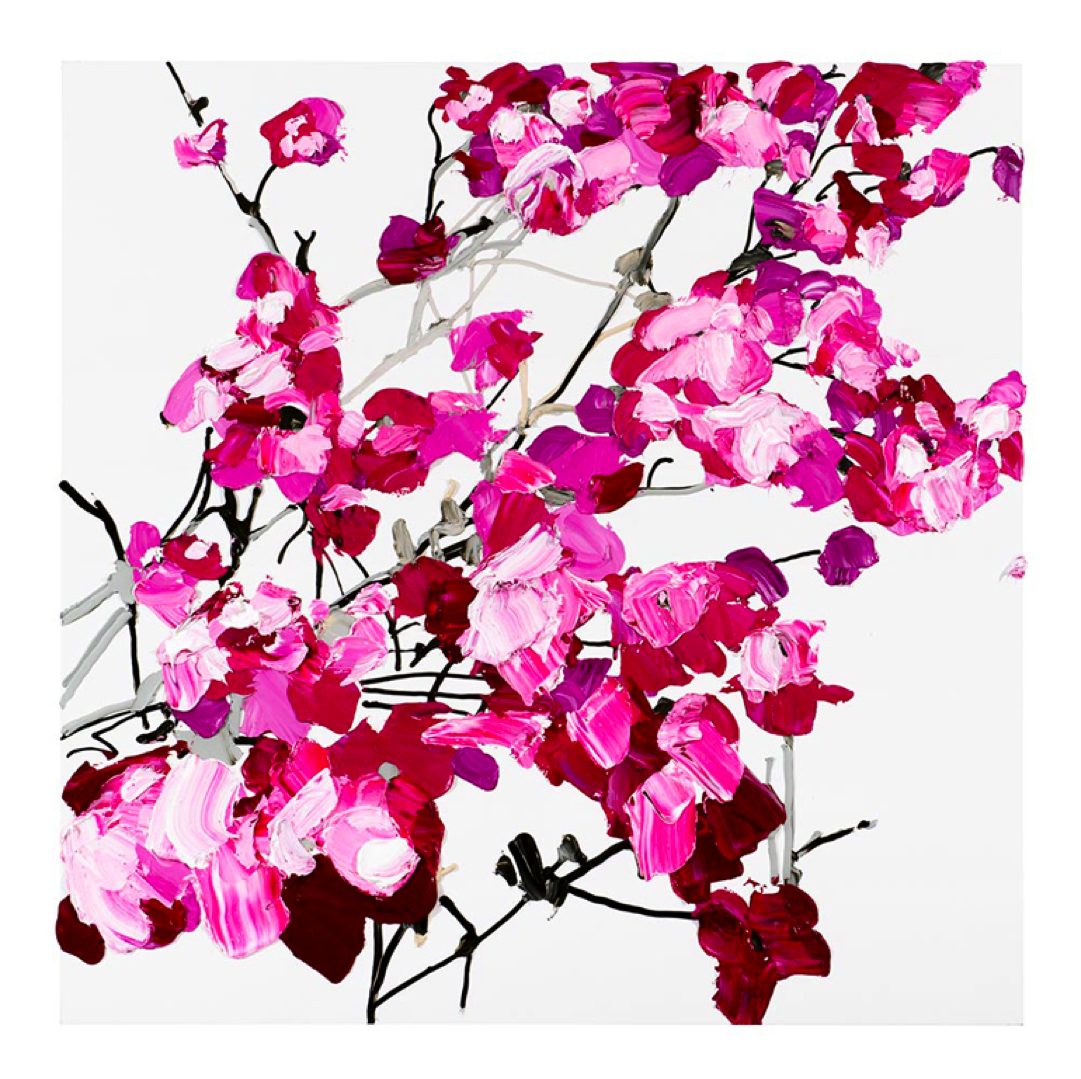 Thank you to Jacqui Turk www.jacquiturk.com.au for supplying her photographs of Alesandro Ljubicic in his studio.

To view the works in person, please contact Katrina Hampton. Prices quoted are in Australian dollars and include GST for sales within Australia. Copyright of images remains the property of the individual artist.